There are many different unique types of performers and entertainers for events in Toronto. Many people are looking to enhance their events with live shows and entertainment. Mentalists are a fantastic way to please any audience. Some of the best mentalists in Toronto are in high demand for private and corporate functions. Mentalists perform tricks of the mind and can be very interactive with audiences. Many mentalists focus on psychological illusions and work with volunteers to create the wow factor. Similar to a magic show, a mentalist can engage an audience and have them asking “how did he do that”! Toronto mentalists are great at reading the minds of their volunteers and can present both close up and on stage. There is something very interesting about watching a mentalist perform illusions of the mind. Many people always wonder if mentalism is real. It can sure appear that way if you’re watching a great mentalist show! 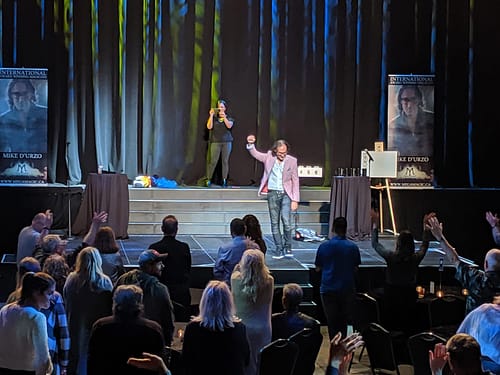 Mentalism shows are fun to watch and exciting due to the interactive nature of the performance. The audience becomes a part of the show and gets to participate in various effects. Mike D’Urzo is one of the top mentalists in Toronto and performs regularly on television networks, theatres, corporate and private events. One of his most popular and requested shows is Mind Kontrol. The show has become a huge success since it premiered over 10 years ago. Mind Kontrol is a show about psychologically manipulating people’s thoughts while incorporating comedy and magic. His psychological illusions have wowed audiences all over the country and he continues to tour with this show. He has received numerous international awards and is definitely one of the best Toronto mentalists. Be sure to watch some of Mike’s performances on this website and his YouTube channel.

Mike D’Urzo is available for bookings at private and corporate events. Mike has always made his shows different by adding a mix of mentalism, magic, mind reading and illusion. The show has music & comedy which appeals to all age groups. It’s a great variety show which puts a twist on a classic mentalism show. Mind Kontrol has been featured for audiences around the world and has received rave reviews. Mike also works with other mentalists in Toronto and collaborates with them for shows and events. A mentalist can work well during a networking reception where there are small groups of people mingling with each other. Mentalism shows are also great for larger events where a formal stage show is required. There are very few professional mentalists in Toronto so it’s best to book early as dates fill up quickly. This unique art form is bound to make an event a success.